Courage is facing being scared to death…then doing this. 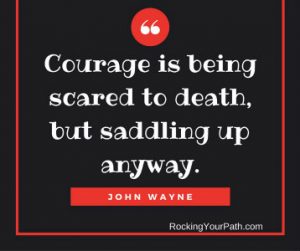 “Courage is being scared to death, but saddling up anyway.”

Love that John Wayne quote. Does it resonate with you, too?

I’m far, far, far from the best horseman, but I saddled up and took my crowd control training with members of the Detroit Mounted Police right along with the rest of the guys on the Sanilac County Sheriff Posse.

I had languished on its waiting list for nearly two years before finally being approved and deputized in the Posse’s 20th anniversary year. I was its first and only female member the first three of the seven years I served.

The specialty day of training started that same spring, capping off the annual month of regular posse training each cold and wet April. Inspector Patrick H. Muscat, long-time head of the Detroit Mounted Police, plus DMP’s finest horse team, consisting of Buford ridden by an officer whose name escapes me, taught by example, stern encouragement, expertly putting us through our paces at the Sanilac County fairgrounds, never once implying we, or our mounts, weren’t up to the challenge.

You want us to do what?

Everything was challenging from the get-go. From getting our horses to willing nibble oats off the hood of a squad car flashing its lights, whirring its siren, and unexpectedly gunning its motor … to trying to stay calm while streams of assorted-sized pebbles tumbled down metal roofs bouncing off us as we trotted single file between the barns … to struggling to remember what each hand gesture and whistle blow meant while trying to stay and move in precise lines, transitioning into columns of various numbers, then into obliques during the “how to quickly move a crowd” sessions.

I knew learning hand and whistle commands were important because it’s near impossible to hear your squad leader issue commands over the roar of excited or angry crowds. New to me was learning what tear-gas does to horses. Not much 🙂 … which is why gas-mask wearing mounted police units are so helpful in dispersing dangerous rowdy mobs.

For our final test we had to ride through a smoke-filled indoor arena cluttered with all kinds of obstacles. There were old mattresses, a police car with siren wailing and lights flashing, fans blowing bits of newspaper about, flags flapping, piles of tires, cardboard boxes, and assorted paraphernalia hanging from roof rafters, none of which we could see from the open doorways.

Yet willingly we entered, all the while knowing at some point someone was going to throw a lit firecracker or two under you and your horse.

Talk about being scared

Three seasoned posse members quit that year before final training day, publicly citing wasting a space on its bylaw-limited 32 man roster with a woman (me) was more than they had signed on to deal with. A few men with even more seniority, including Kirk Clarkson who had sponsored my application, assured me in private those men were scared of the newly instituted, professional-level training and too worried their horses or pride would get hurt.

Perhaps there were elements of truth in both stories. It just made me more determined to try. I’d come too far not to. I was willing to fail. I was tired of being afraid of things. But especially, I was tired of not trying to do things that scared me.

During training we learned it wasn’t really about conquering our fears … or scaring our horses or putting them (or us) in danger … it was all about learning to trust ourselves and one another … my skills, my determination, my fellow posse members, the trainers, my own horse and, hopefully, upping their trust in me. If we’d done well, the circle of trust was strong. We understood what frightened us and learned to work with it and through it.

As individual riders, our number one job was to understand what our horse’s likely reaction was to as many different situations and scenarios as we could imagine and replicate. As a unit, we understood which teams of horse and rider were safe to assign to mingle closely within a crowd letting tiny tots holding sticky tubes of cotton candy reach up to pat a velvety nose, which could safely patrol the midway among its many carnival games, flashing neon lights, fast spinning screechy rides and screaming passengers, and which teams were better suited to directing incoming cars to open parking spots in the back lot far from the commotion and noise.

Over the years I passed the annual training with three different horses. The best (and longest serving with me) was my dear sweet and sensible, old 16.2 hand buckskin Quarter Horse, Echo. We were cleared to ride the midway and mingle with the most sensitive and small individuals and never-know-what-might-happen crowds.

We also proudly lead our unit in a couple parades because a flapping flag, bang snaps, and cheering mobs rarely fazed him and, just as important, he responded immediately to the gentliest hand, leg, or voice command … important when holding reins in one hand and a long, heavy, unwieldy flag pole in the other.

Jimmy D, another Quarter Horse, was small, eventually did what was asked of him but nothing more, and while a pretty light caramel-colored chestnut had the personality of a stubborn barn door. I didn’t keep him long but he’s featured in some of my parade photos, plus in my only official Sheriff Posse volunteer deputy photo that used to hang in the Sanilac County Courthouse.

Then there was Piper, a beautiful, unusually high-spirited young dark chestnut Morgan gelding who easily spooked. We passed the month-long training okay. At least I was still in the saddle teeth clenched at the end of each day. But he was too jittery around crowds of people, sometimes surprised and frightened by his own shadow. He and I were relegated to the grassy back-forty parking field during the two annual county fairs.

He also pranced a full half block primarily on his hind legs on a 102 degree 4th of July to the Ooo’s and Ahh’s of the onlookers packed along M-83 that runs through historic Frankenmuth, Michigan, as it descended the steep slope towards the Cass River Bridge during the only parade in which I rode him. To his credit, Hyper Piper, as he was better known, was lovely to ride on long, lazy trail days practicing our search and rescue routines in the 4,000 acre Minden City State Game Area and Swamp.

Finishing the firecracker obstacle course that first year remains one of my proudest and life-changing moments.

Until then I was too scared to ride even the tamest of roller coasters after braving the Wild Mouse on Bob-Lo Island when I was about eight, circa 1960. It was relatively tame then, and an absolute sleeper by today’s standards, but those 90 degree turns pitching the itty-bitty car in which I sat momentarily over the edge scared the bejeepers outta me.

Growing up I had avoided a myriad of potentially scary situations by simply being a “good girl”, willingly staying behind to hold the hand of a younger sibling too short to ride the roller coaster, or being too busy to go skiing with high school friends.

Until I married a farmer at 18, got my first horse for my 28th birthday, and joined the posse, my horse-riding adventures were limited to short gallops along smooth, flat terrain, slow meanders up and down gently-sloping creek beds tightly gripping the saddle by holding reins and saddle horn with one hand and the cantle in back with the other, and always agreeing to “be stuck” with the oldest, pokiest horse at the riding stable.

Many things still scare me … but after learning to trust a process designed to help keep me and others challenged yet safe, I’ve been much more willing to face my fears head on than run and hide … or avoid altogether.

And, more importantly, what are you doing to saddle up and work through it?

Let me know if you’d like some help. I can be your Inspector Muscat, someone to challenge and encourage you. Someone to help you learn to trust yourself, your talents, your skills, and lead you safely through what scares you in building a successful business. Click here and schedule a session with me today.

Kat is a business life mentor who is affectionately known as The Purgatory Relief Coach for People Who Think Marketing Is Hell for her ability to help small business owners quickly move past obstacles that had kept them trapped in despair and leaking money.

Apologizing in advance for any trouble you may have viewing images, links or info that hasn't been updated yet.

Get the Easy Trello Course

TRELLO BITES Tip: How to easily add URL image to a new Trello Card without linking it directly

Quick Tech Tip: How to Identify and Report Phishing Emails to PayPal

Are You Holding On to Something You Should Shed?

Please log in again. The login page will open in a new tab. After logging in you can close it and return to this page.