You are here: Home / Archives for family issues 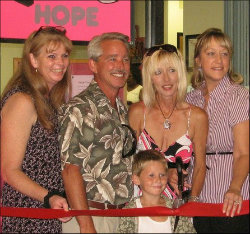 Today, again in support of October being Domestic Violence Awareness Month, I’m taking the opportunity to share with you the impact of how one woman not only successfully broke the cycle of domestic abuse in her own family but has gone on to create an awesome Michigan-based non-profit from a single, seemingly simple item, and an idea to share.

Jackie Bobcean refers to this as “Our Journey” but it’s so much more. It’s a story of strength and hope and healing — story of empowerment.

Below are Jackie’s words. Her story. You can see her in the photo, third from the left with her ever-supporting and loving husband, Jeff. At far left, is her friend, Deb. Far right is her best friend, Lisa, who’s also my younger sister. And the little guy is Jackie’s grandson. Lisa and Deb helped establish HandBags of Hope.

When I startedHandBags of Hope in 2006 I had no idea it would take on a life of its own. I had no idea of the journey it would take me on or the healing it would provide. I didn’t think about domestic violence shelters, just that the purses were going to a shelter. After receiving a couple thank you letters and speaking with shelter directors, I knew these gifts would truly impact a woman’s recovery and growth. I began thinking about it and realized that at an early age we learn not to go in our mother’s purses, husbands of 30 years still bring the purse to their wife. It’s true  — women run a “small world” from their purses. They depend on it daily. Our handbag is one of our most personal of possessions.

Domestic violence is mostly hidden behind closed doors, as is discussing it. From the outside, the family looks normal. But it’s when no one is looking that the abuse begins. It does not have to always be physical; a tongue can cut as deep as a knife. Verbal abuse is much more powerful than a punch, especially when the words are repeated daily, year after year. Many abusers know where to leave their mark, so now she goes to work and functions daily. No one knows the pain she’s in with every lift of her arm or bend in her back. Co-workers and school mom’s have no idea how she dreads the ride home. Sometimes it starts in high school, teen love. Most times there is abuse in the home of the abuser, his behavior with his girlfriend is by example.

I know a lot about this because I grew up in such a house. I chose not to go into a lot of detail but will share a little of what HandBags of Hope has done for my personal journey. I had a younger brother. Billy was 17 months younger than me. Everyday growing up we listened to how stupid we were, how we would amount to nothing in life. My brother lived his entire life looking for my father’s respect and approval, something he never gained. On Christmas Eve morning 2003 my brother committed suicide. He didn’t leave a note, he didn’t have to. The image he left my father haunted him to his grave 11 months later. My mother’s illness and passing in 1999 was another time my father checked out on. But my mom and brother were best of friends and I believe Billy’s finally found Peace.

I could not convince my mother to leave and I could not protect my brother as an adult.

If the handbags we donate make a woman stand a little taller and walk a little prouder we’ve done our job. If that handbag provides additional reassurance of her decision to leave, we’ve done our job. Every time she goes into that handbag to retrieve something she knows there’s a little love from a total stranger always on the bottom. Maybe there’s one child who won’t grow up to think he’s worthless and unlovable.

I broke the chain of abuse and violence with my daughters and husband. Each day is truly a present, it all depends on what we want our Present to be.

Lisa and I have been friends from age 11 growing up in the city of Detroit. Lisa is also a survivor of Domestic violence.

Debi was my neighbor and we’ve been friends since 1985. Debi is a victim of Domestic violence survivor.

Click here to learn more about HandBags of Hope. Consider supporting them with a donation.

More importantly, look for opportunities to bring awareness and help within your own family, group of friends, your neighborhood.

On behalf of the 1 in 4 affected by domestic violence, and also myself as a domestic abuse survivor — and now thriver — Thank you.

Have you broken the cycle in your own family? Consider sharing your story in the comments below.

If you are involved with an organization that helps bring awareness to this issue and provides help for those in need, please feel free to include a link to your website. Also include the location.

How sad that the prevalence of domestic abuse is so rampant that bringing awareness to it makes having a whole month devoted to it is expected.

Unfortunately, as a society, far too many people still don’t comprehend that one in four —1 in 4!—  has been directly affected by this travesty.

Once while giving a presentation on behalf of HandBags of Hope, a Michigan-based non-profit whose mission is to help empower and support survivors of domestic abuse, I decided to do an impromptu test of that statistic. Sure enough, a quick  show of hands substantiated the 1–in–4 ratio.

Last year, Jackie Bobcean and Lisa Devergilio, co-founders of HandBags of Hope, were honored to be a part of an awesome documentary created and produced in the metro Detroit area through efforts of Dorothea Sharon and a production team comprised of talented young adults. The documentary titled Love is Not A Black Eye shares some of the struggles experienced by women from diverse backgrounds. They also share the triumph and empowerment once they broke free.

Here is the trailer for Love is Not A Black Eye:

As a survivor myself, helping to bring awareness to this issue feels an especially fitting topic for an October post.

Have you, or someone you love, been affected by domestic abuse?

If you are currently in danger, don’t remain silent. Reach out for help. Call 911 if needed. You are deserving of a safe home environment.

For more information check the National Coalition Against Domestic Violence.