I rarely share my political viewpoint on Facebook, but when I did on this topic June 9th I soon realized I needed to share it publicly here, too.

What this rant is not about

It’s vital you understand that what I’m about to share has NO relevance to whether I am for or against Hillary Clinton, the Women’s Movement, nor whether I sit in alignment with Democrats vs Republicans or any other party or frame of political reference.

It IS about what I feel is a gross mistake in terms of ethical marketing committed by current Secretary of State Hillary Clinton.

… as Hillary claims in this Good Morning America interview with Diane Sawyer on June 9, 2014. Read or listen to what she said yourself here. 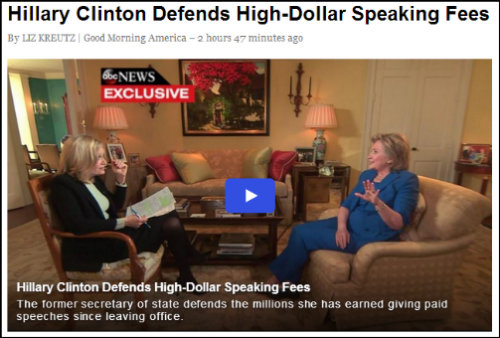 Did she have to defend her fees at all?

Would a man, including her husband and former president Bill Clinton have used the “we were broke” argument as a defensive maneuver? Or would he, as well as likely all males of high political and business profile, have embraced their personal power and sense of earned entitlement?

What you do instead

Male or female … you DO charge a rate equal to what you feel you deserve within your target market based on your perceived value of what you intend to deliver.

It’s up to the market to determine whether paying your fee is worth a certain dollar amount.

On Facebook, one group member (female) said, “I think that if they were talking to Bill Clinton, they wouldn’t have even brought it up. And I don’t think she should have defended herself with the ‘we were broke’ argument, but I don’t know how she SHOULD have answered it.”

Hillary could have said:  “I don’t need to defend my speaking fee. I believe it’s in line with my level of experience and value I bring to the audience. Whether my fee is “fair” is up to those who invite me to speak and are willing to pay the investment.”

A woman in another business mastermind group wrote, “I agree Kat. But women often have a hard time owning their worth, myself included.”

Which, admittedly, made me nod in agreement and reply, “Yes. Partially explains my astonishment and shock at seeing this today. Knowing Hillary used this “excuse” will set a lot of women (and some men) back from honoring their worth. Hillary had an opportunity to stand in her personal power and express that her fee doesn’t need “defending” thus providing many women with a much needed example of personal empowerment. Hillary flinched.”

That thump you heard was the Women’s Movement crashing

Just when you really start believing things for women have changed and the genders can embrace equally their positions, someone steps up with a mallet and brings it crumbling down.

The non-issue on becoming a grandparent

It reminds me of how obviously and immediately laughable it was just a few days ago when some were trying to make an issue of impending grandmotherhood being too great a distraction and otherwise negatively affect Hillary Clinton’s ability to run and serve as the president. No one ever questioned any male candidate’s ability based on being a father or grandfather.  In fact, it’s usually a point in the “Ain’t I grand!” column.

No one brought home the absurdity more succinctly than Jon Stewart.

Still I can’t get out of my mind just yet that Hillary may have set the Women’s Movement back a 100 years.

At least for the thousands of women still wrestling with how to embrace and express their wealth of experience and value without appearing unduly boastful or immodest, Hillary’s defense of her fees versus standing strongly in her power will take some work.

Then again maybe what happened to Hillary will serve as a wake-up call to many of those same women.

Because sometimes seeing what not to do is the most powerful lesson of all.

Readers, what’s your take on this situation. Should women … or anyone feel pressured to defend their fees? How do you think Hillary could have responded instead?  Please share your comment below.

Kat is a business life mentor who is affectionately known as The Purgatory Relief Coach for People Who Think Marketing Is Hell for her ability to help small business owners quickly move past obstacles that had kept them trapped in despair and leaking money.

Apologizing in advance for any trouble you may have viewing images, links or info that hasn't been updated yet.

Get the Easy Trello Course

TRELLO BITES Tip: How to easily add URL image to a new Trello Card without linking it directly

Quick Tech Tip: How to Identify and Report Phishing Emails to PayPal

Are You Holding On to Something You Should Shed?

Please log in again. The login page will open in a new tab. After logging in you can close it and return to this page.